“The Mahatmas and Their Letters to A.P. Sennett”
Who are the Mahatmas?
The Mahatma Letters are an interesting body of correspondence between two ‘Mahatmas,’ two shadowy Masters of ancient wisdom, and a pair of Englishmen in British Colonial India, discussing the young Theosophical Society and outlining the philosophy that came to be known as Theosophy.  Although the Letters were not made public at the time, the teachings were summarized in the book Esoteric Buddhism which introduced Theosophy to the western world. Jon will introduce the correspondents and outline the teachings presented in the Letters.

Friday- Jon will give a PowerPoint presentation offering an overview of The Mahatma Letters and how they came about.

Saturday- will be a full day workshop on The Mahatma Letters.  The morning will be devoted to Letter 47 (in the chronological version) from K.H. to A.P. Sinnett.  Then, after a light lunch we will turn to Letters 125 and 126.

Sunday- morning brunch at a local restaurant – Jon will lead us in discussion on the Maha-Chohan’s Letter. 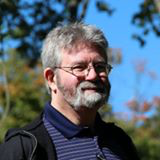 Biography:  Jon Knebel has been a student of Theosophy for over 20 years.  He led a Mahatma Letters study group at the Olcott headquarters from September 2011-until April 2014.  Jon has now taken on the responsibility for the compiling, editing and publishing of H. P. Blavatsky’s personal correspondence as part of the Collected Writings series.  Jon also serves on the board of directors of the Theosophical Order of Service and on the board of International Theosophical Conferences, Inc. (ITC).

This entry was posted in Uncategorized. Bookmark the permalink.